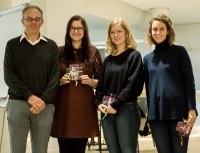 For the yearly writing course “Current Issues in the Language Sciences”, graduate students of the IMPRS for Languages Sciences are judged on an article written for the general audience. Last Tuesday, MPI Managing Director Prof. Peter Hagoort announced the author team of Francie Manhardt, Theresa Redl, and Mónica Wagner to have written the best article for Cohort 2016.

The winning article "Three common myths about bilingual children" written by Cohort 2016 members Francie Manhardt, Theresa Redl, and Mónica Wagner is the product of a yearly two-part IMPRS workshop conducted by Dutch science journalist Ronald Veldhuizen. In groups of three, IMPRS PhD students selected a prominent language researcher to learn about the current issues in the various domains of the language sciences. After conducting interviews, they were tasked with communicating these findings in an accessible manner for the layman.

The winning article describes the work of Radboud University researcher Sharon Unsworth on bilingualism in children. In particular, jury members remarked on the excellent use of anecdote to set the stage for the topic, and the clear structure. The authors introduced the topic with the example of the Dutch Royal family – the three princesses are raised bilingually, because of their mother’s Argentinian roots. “The fact that the Royal Family is also bilingual doesn’t come up often in language-related discussions in the media. We wanted to convince our readers that bilingualism is not a bad thing at all – whether you’re a Moroccan immigrant or Princess Amalia,” Manhardt, Redl, and Wagner explained.

Interviewee Unsworth is also a proponent of communicating science to the public. In close collaboration with MPI scientists, she is organizing "Kletskoppen", the Netherlands' first child language festival - taking place in the central library and arthouse cinema LUX in Nijmegen on 28th October. Unsworth and her team are also looking for bilingual families to take part in their project. You can find more information here.