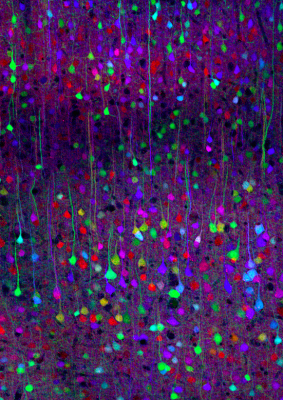 Sometimes described as a blending of the senses, synaesthesia is an unusual trait where exposure to a triggering stimulus (e.g. music or letters of the alphabet) causes an immediate additional sensation (e.g. colours or tastes). In a special issue of the Philosophical Transactions of the Royal Society, the oldest scientific journal in the English-speaking world, experts from a range of disciplines discuss how investigations of synaesthesia can shed light on the fundamentals of human perception and cognition.

This special issue is edited by MPI researchers Simon Fisher and Amanda Tilot, and contains 16 articles, with findings from multiple new experimental studies of this fascinating condition, including the largest synaesthesia genetics study so far.

With its array of types, and a tendency to run in families, synaesthesia offers a window into the brain systems underlying human experience; what factors shape them, and how they vary from one person to the next. At the intersection of psychology, neuroscience, and genetics, the topic is best understood in an interdisciplinary framework. This led Simon Fisher and Amanda Tilot, from the MPI's Language & Genetics department, to organize a Scientific Discussion meeting dedicated to the topic, which was held over 2 days at the Royal Society in London in October 2018, with talks and debates from the leading scientists of the field.

A major outcome from this meeting is a dedicated issue of peer-reviewed papers, "Bridging senses: novel insights from synaesthesia", published today in the Royal Society's flagship journal Phil Trans B. Research articles describe novel findings on crossmodal associations, how synaesthesia connects to mental imagery and to neuropsychiatric traits, and what it says about the interplay of genes and environment in learning. Reflecting the dynamic discussions of the meeting, thought-provoking reviews and perspectives distil the field's growth over the last two decades, while setting out blueprints for the future of synaesthesia research.

In one of the articles, an international team led by the MPI researchers report the largest molecular genetic investigation of synaesthesia to date. It's already known that this trait is complex and heterogeneous at the genetic level, making it challenging to study. Tilot and colleagues assembled a cohort of >700 unrelated people with validated grapheme-colour synaesthesia, which they compared to an independent set of >2,000 non-synaesthetic individuals. They assessed common DNA variation across the genome, and tested for potential genetic overlaps between synaesthesia and neuropsychiatric traits that have previously been linked to the condition. An association was seen between polygenic scores from large-scale schizophrenia genome-wide screens and synaesthesia, but the relationship was very subtle. As sample sizes increase over the coming years, genetic studies of this kind hold great promise for deciphering the biology of synaesthesia and its connections to other brain-related traits.

More on the MPI's research programme on synaesthesia genetics, and information on how to take part.