We seem less susceptible to emotions in a foreign language, and our eyes reveal it 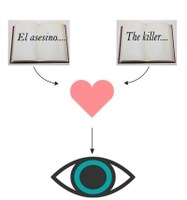 Does it matter in which language we receive emotional information? A new study by an international team of scientists, including the MPI’s Sara Iacozza, shows that it does, and the eyes reveal so. Automatic emotional reactions, as measured by the size of the pupil, are weaker when we read in a foreign language, compared to our native language.

The way we perceive reality and feel emotions depends on our personal experiences. "People speaking more than one language report feeling emotionally different when using their native language compared to their foreign languages," Sara Iacozza of the MPI for Psycholinguistics says. "For instance, a specific reprimand like ‘Don’t interrupt!’ has a strong emotional connotation in adulthood, because people often received this command as a child. But people react in an emotionally different way when a reprimand is heard in their own native language."

Another place where we find emotional language effects is when people are presented with moral dilemmas. For instance, if people are asked to choose between two morally unacceptable outcomes of a problem, such as killing one person to save five others, or killing the five to save the one person. People are more likely to choose the more rational option (killing one to save five), if they are presented with this dilemma in a foreign language. "This is called the foreign language effect, which is the ability to emotionally disengage when we process information in a foreign language", Iacozza explains.

Previous studies into the subject have based their findings on participants' subjective ratings of their experiences or on their explicit behaviours.  To investigate if emotionally-charged material in a foreign language could potentially also evoke an automatic physical response, the research team recorded participants’ pupil size as a measure of their emotional reaction while reading.

In a recently published paper in the journal PLOS ONE, the team of scientists described that when participants read this emotional material in a foreign language, their pupil size was smaller compared to when reading in a native language. This means that people had a weaker reaction to the emotional sentences if they were presented in a foreign language.

"The findings give us a deeper understanding about how the relationship between language and emotion is modulated by the context in which the language itself is learned," according to Iacozza. “While foreign languages are learned in mostly formal settings, like a classroom, it would be interesting to test now whether the foreign language effect can be reduced by teaching foreign languages in a more emotionally grounded context.”