ZEYNEP AZAR WILL DEFEND HER THESIS MONDAY 28TH OF SEPTEMBER 2020 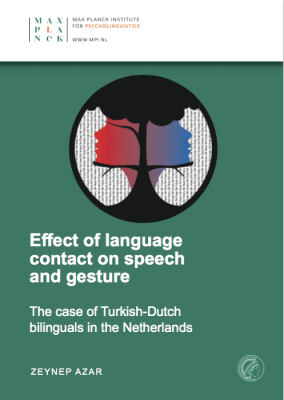 On Monday 28th of September 2020, at 12.30, Zeynep Azar will defend her thesis entitled "Effect of language contact on speech and gesture: The case of Turkish Dutch bilinguals in the Netherlands". As with all defenses, it is a public event and everybody is welcome to join. Due to the restrictions surrounding the COVID-19 outbreak, the event will take place and be accessible via live-stream.

Due to increased immigration and globalization, people from different languages and cultural backgrounds have daily contact with each other in many countries. Bilingualism is not the exception anymore but is almost the norm. But what is the impact of language contact on bilinguals’ language and communication patterns?

There are half million people from Turkish backgrounds in the Netherlands (heritage speakers) who speak both Turkish and Dutch on a daily basis. How does being bilingual influence those speakers’ Dutch and Turkish? Furthermore, languages are not only spoken but also are accompanied by gestures, and gestures are known to vary across language and cultures. For example, being part of Mediterranean culture, Turkish speakers might be assumed to gesture more frequently than speakers of Dutch. How are gestures influenced by language contact in the case of bilinguals?

In her doctoral thesis, Zeynep Azar investigated for the first time how Turkish-Dutch bilinguals of second generation use Dutch and Turkish and gesture spontaneously while telling narratives. She compared bilingual patterns to those by Dutch speakers who do not know Turkish and to Turkish speakers in Turkey as controls. She focused on how people in a narrative are maintained in discourse. Dutch speakers use full phrases for introductions, but use pronouns (hij, ze/zij) right after to refer to same people. However, once they introduce referents, Turkish speakers drop referents to maintain them and use pronouns only in specific pragmatic contexts such as emphasis and contrast.

The findings showed that despite these differences, there were no effects of contact or cross linguistic influences between the two languages of the bilinguals. These bilinguals were as proficient in both languages and maintained language specific speech and gesture patters in each language. Furthermore, they maintained culture specific gesture patterns in each language. For example, when they spoke Turkish, they gestured as much as non-bilingual Turkish speakers would do, and more frequently than they would when the same speakers spoke Dutch, again in line with non-bilingual Dutch speakers.

These results show that, heritage speakers with immigration background can maintain language specific speech and gesture patterns in their heritage language (Turkish) while at the same time showing monolingual-like patters in the majority language of the society they live in (Dutch).