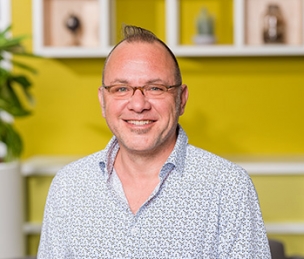 Hartmut Fitz is a lead investigator in the Neurocomputational Models of Language group. He is affiliated with the Donders Centre for Cognitive Neuroimaging and the Language in Interaction consortium.

In his research, he studies the neurobiological principles that implement language processing in the brain. These include neuronal dynamics, synaptic plasticity, and structural properties of cortical circuits. He is particularly interested in the memory systems that are required for language, such as a long-term storage of words and processing memory for sentence comprehension. The central puzzle here is how short-lived biological events (on the order of milliseconds) can support language behavior on timescales of seconds, minutes and hours. To investigate this question, he uses large-scale simulations of spiking networks that are engaged in structured sequence processing. The memory characteristics of these networks can then be studied systematically under different assumptions about their neurobiological makeup. Hartmut has also worked on language learning and adaptation, and the functional role of event-related potentials.

He studied Mathematics and Philosophy in Berlin and at UC Berkeley, and did his PhD on Neural Syntax at the Institute for Logic, Language and Computation in Amsterdam. He joined the MPI from the University of Groningen on an NWO Veni-funded project in 2012.