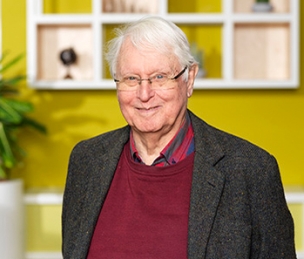 My career started in 1967, when I became a lecturer in Linguistics at the University of Cambridge. In 1970 I moved to Oxford, where I again became a lecturer in Linguistics. In 1974 I took up the chair of Philosophy of Language at Radboud University, Nijmegen, The Netherlands. In 1995 I moved over to the Arts Faculty of that university, to become the professor of Theoretical Linguistics. In 1988 I was elected as a fellow of the Royal Dutch Academy of Sciences. Since my retirement in 1999 I have been a Research Fellow at the Max Planck Institute for Psycholinguistics, also at Nijmegen. My publication list comprises about 180 titles, mostly articles, but including eight major books on linguistic theory and the history of linguistics: Operators and Nucleus (Cambridge University Press 1969), Discourse Semantics (Blackwell 1985), Semantic Syntax (Blackwell 1996), Western Linguistics (Blackwell 1998), Chomsky’s Minimalism, (Oxford University Press [OUP] 2004,) Language in Cognition (OUP 2009), The Logic of Language (OUP 2010), From Whorf to Montague (OUP 2013). Throughout my academic life, my main interests in theoretical linguistics have been the theory of grammar and meaning, the semantics of discourse, presupposition theory and the history of linguistics. I helped develop Generative Semantics from the very beginning, expanding it into a fully fledged theory of language while steering a middle course between formalism and ecologism. Between 1980 and 1995 I occupied myself with Creole languages, doing field research in and describing the grammars of Mauritian Creole and of the Surinamese Creole Sranan, for which I developed a (now official) orthography. From 2000 onward I have been engaged in modelling the natural logic of the human species as expressed in natural language. This work implies a major shift in perspective as regards the applicability of standard modern logic to the semantics of natural language. I have also cultivated a lifelong interest in history, as a result of which I published, in 2016, the Dutch book Excursies in de tijd (Excursions in Time), a collection of eighteen essays, ranging from prehistory to modern times, on the development of Western civilization and the general cultural, spiritual and intellectual emancipation of mankind.