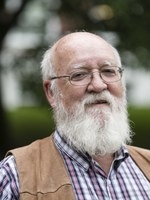 Autonomy is self-control; it is a basic feature of life, but it comes in many forms. Simple autonomy, enjoyed by bacteria, oak trees, and ants, requires sensitivity (the capacity to track relevant affordances) but not anything like consciousness—unless we want to call automatic elevators conscious. What can an agent—a robot, an animal, a human being—notice? And when it notices something, can it notice that it is noticing it? Evolution has designed huge arrays of affordance-trackers, along with the concomitant effectors (Ruth Millikan’s consumers) to make them useful by informing the control of a degree of freedom. Human beings, thanks to the complexities that emerge from cultural evolution, have many more degrees of freedom than other living things, and the problem of controlling them all is never really solved. The task facing us at every moment is not just “Now what should I do?” but “Now what should I think about?” and the possibilities are Vast (Dennett, 1995—not literally infinite but Very much more than ASTronomical). This is the arena of human consciousness, and since there is no Boss Neuron, our ongoing attempts to answer this question must be achieved by competitive interactions among shifting coalitions of neural circuits.

Lecture 2: The role of language in human consciousness

What can an agent—an animal, a robot, a human being—notice? And when it notices something, can it notice that it is noticing it? And notice that it has noticed its noticing? Language, even “proto-language”, provides a host of attention-holders, labels or landmarks, that permit more and more sophisticated noticing, and hence more ways of thinking, and more problems of self-control, in a combinatorial explosion of representations and representation-consumers. Rudimentary versions of this process can be seen in dogs such as Chaser, the border collie who has learned over a thousand words, according to his owner. After the first dozen, it gets easier: a sensitivity to a kind of pattern has yielded a higher-order talent. Human consciousness is not all “talking to oneself silently”, though word-tokens play a huge variety of roles in our thinking and experience. However, our capacity to tell others—and ourselves—what we are experiencing plays a foundational role in shaping our conscious phenomenology.