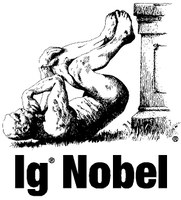 MPI researchers Mark Dingemanse, Francisco Torreira and Nick Enfield have won a coveted Ig Nobel Prize for their work which shows that ‘Huh?’—a word people use when they missed what someone just said—may well be a universal word. The prize was awarded in the same week that their research group published a major follow-up study on how people deal with misunderstandings in conversation.

The Ig Nobel Prizes honour scientists for achievements that first make people laugh and then make them think. Dingemanse: “What may be most surprising about our finding is not that ‘Huh?’ appears to be universal, but that this was discovered only now. Linguists have only recently started to compare conversation across cultures. There’s a lot still to find out.”

Earlier this week, a large team led by Dingemanse and Enfield released a major comparative study, which shows just how crucial the system for fixing misunderstandings is in everyday conversation. The team found that people ask for clarification on average every 90 seconds, and do so in the same ways regardless of the language being spoken. The word “Huh?” is only one of the ways in which people worldwide fix the tiny rifts in understanding that regularly crop up in conversation.

The Ig Nobel-winning paper on “Huh?”, which came out in November 2013, became one of the most widely read papers in the open access journal PLOS ONE. Dingemanse: “It's amusing to get an Ig Nobel for this study, which was essentially bycatch in our larger research project on how people worldwide fix misunderstandings. We hope the prize helps draw attention to the larger body of work revealing the social shape of language.” The MPI’s Language and Cognition Department, where the work was carried out, has a strong tradition of research on conversational structure, much of it organised through the “Interactional Foundations of Language” project.

Recipients of the Ig Nobel receive their prizes from Nobel prizewinners in a ceremony at Harvard University. “None of us was able to go there to collect the prize and deliver the acceptance speech, which is strictly capped at 60 seconds,” Dingemanse said. “But we’ve sent them a video of what they already confirmed is the shortest acceptance speech ever. We’ll let you guess what we said.”

Three years ago, Tulio Guadalupe of MPI’s Language and Genetics Department was awarded an Ig Nobel prize for his work with Anita Eerland and and Rolf Zwaan (Erasmus University Rotterdam): "Leaning to the left makes the Eiffel tower seem smaller", showing that posture can affect mental estimates of quantities.