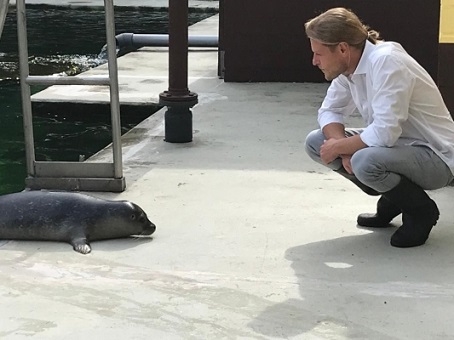 Andrea Ravignani, Independent Group Leader of the Comparative Bioacoustics Research Group at the Max Planck Institute for Psycholinguistics in Nijmegen, has been awarded a European Research Council (ERC) Starting Grant. Ravignani’s research, and that of his group, tackles some fundamental questions: How did speech evolve? And why are humans such musical animals? Could our abilities to speak and make music be connected, sharing a common evolutionary history?

Andrea Ravignani investigates the evolutionary and biological bases of vocal sound production and music cognition, and the role these abilities may have played in the origins of speech and music in humans. His team records animal sounds and studies the behavior of vocal animals (mostly seals), to better understand the evolutionary history of human capacities.

The Origins of Human Rhythm

In his ERC project The Origins of Human Rhythm (TOHR), Ravignani will be searching for the evolutionary roots of the human capacity for rhythm. The project aims to show which species have rhythm, and why humans evolved to be such chatty, rhythmic creatures.

A team of researchers will be testing the rhythmic abilities of humans and four other species, which include two non-human primates and two aquatic mammals. Ravignani plans to study rhythmic abilities using various measures, including acoustic analysis of sounds, gait tracking and breathing measurements.

Comparing humans and animals will allow the researchers to test hypotheses on the origins of rhythm. For instance, the ability to learn new sounds may be an evolutionary precursor to human rhythm. Also, similar evolutionary pressures—as opposed to common ancestry—may lead to similar rhythmic traits. Finding rhythm in other species will provide a test bench to reconstruct the origins of human rhythm.

ERC starting grants have been awarded to 397 talented early-career researchers. Following the first call for proposals under the EU’s new R&I programme, Horizon Europe, €619 million will be invested in excellent projects, with grants up to €1.5 million for a period of five years. The grant enables ambitious scientists in the early stages of their career to work independently, form their own teams and pursue their best ideas.