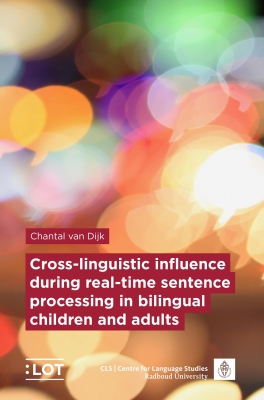 On Friday 17 September 2021, at 10.30, Chantal van Dijk will defend her thesis entitled 'Cross-linguistic influence during real-time sentence processing in bilingual children and adults'. Due to the restrictions surrounding the COVID-19 outbreak, and the corresponding limitations regarding number of guests allowed in the Academiezaal, the event will be accessible via live-stream. As with all defences, it is a public event and everybody is welcome to join online.

Bilingual children sometimes say things in a slightly different way than monolingual peers. A French-Dutch bilingual child could ask, for example: “Waarom je huilt?”, using a French word order in Dutch. The morphosyntax of one language can thus influence the production of sentences in the other.

In this thesis, Chantal investigated whether such influence is also present in sentence comprehension, in particular during real-time sentence processing. She showed that bilingual children’s one language becomes activated when children are listening to sentences in their other language. This co-activation resulted in subtle influences between languages. At the same time, such cross-linguistic influence only became visible under specific circumstances and by means of online experimental techniques. In other words, cross-linguistic influence during real-time sentence comprehension is, on the one hand, part and parcel of growing up bilingual. On the other hand, such influence can be subtle and often invisible to the naked eye.