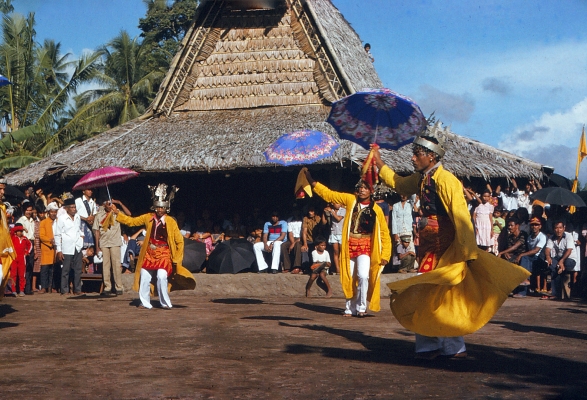 The Language Archive at the MPI for Psycholinguistics are pleased to announce that The Halmahera collection has been added to the archive.

The Halmahera collection consists of 10 bundles of speech, instrumental music and songs recorded with the Sahu people in the 1980s. The Sahu live in the north western part of the island of Halmahera in the North Moluccas, Indonesia. They presently number about 25,000 people. Like several other language groups on the northern peninsula of the island they speak a Non-Austronesian or Papuan language. The island was tributary to the Sultans of Ternate, evidence of which can still be encountered in Sahu culture.

Around the turn of the 20th century, Dutch Protestant missionaries compiled dictionaries on the languages of Galela and Tobelo in the north east. In 1987 a Sahu-Indonesian-English Dictionary and Grammar Sketch was published (Visser, L.E. and C.L. Voorhoeve). Recently,  linguists from the Summer Institute of Linguistics have become involved with several of the Halmahera languages, including Sahu.

The collection was created by Professor Dr. Leontine Visser of Wageningen University and Research.  Professor Visser writes: “Data was gathered during a two year stay and several shorter visits (1979-1988) for my anthropological Ph.D. research at Leiden University. Since Halmahera, and Sahu in particular remains little known until today, after retirement from Wageningen University I decided to digitize all my research data and provide detailed descriptions to be published online. Photos and slides from Sahu have been made accessible for free on the collection site of the National Museum of World Cultures in Leiden (search for “Halmahera” on their website).

Thanks to the Language Archive of the Max Planck Institute images from the Leiden collection are now supplemented and enriched by the online availability of the recordings of the discourses and history as well as the sound of drums and gongs, the unique legu dance and falsetto singing (i’o). The recorded Sahu language texts have also been transcribed and translated into English. Each bundle also contains reference to my publications on Sahu agriculture, everyday life, and the annual harvest festival”.

The Head of The Language Archive, Paul Trilsbeek writes "We are very pleased that Prof. Visser approached us for archiving the speech and music recordings she made with the Sahu people on the island of Halmahera in Indonesia in the 1980s. Until now there were very few resources available on the Sahu language in the various archives. Having a specialised archive like ours take care of these unique materials is the best way to ensure that they are being adequately preserved and can be made available to interested users now and in the future."

The Halmahera collection at The Language Archive can be accessed here.