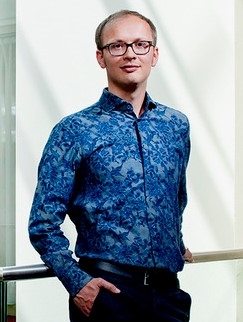 The MPI is proud and happy to announce that former senior investigator - and now associate professor at Radboud University - Mark Dingemanse has been awarded the Heineken Young Scientists Award 2020 in Humanities. Dingemanse is receiving the award for his research into why languages are the way they are and how using language makes us human.

Mark Dingemanse’s work enjoys international acclaim. The jury praises the way he raises unconventional questions on the “margins” of linguistics, his dedication to open science – making data and methods of analysis freely available to other researchers – and his efforts in communicating science to a wide audience. He has, for example, organised various public events about linguistics and is the co-founder of Stemmen van Afrika [Voices of Africa], a website on the linguistic diversity of Africa.

Dingemanse’s research addresses major questions: What do we do with language? What does language do with us? Why are languages the way they are? His work tends to deal with matters that have so far escaped the attention of linguistics, and it therefore regularly leads to new insights. He investigates, for example, the unwritten rules of language, studying words and signals that everyone uses all the time without thinking, like “m-hm,” “huh?”, or “oh!”. Those little words are perhaps the key to our language ability and our social life: without such rapid metacommunication, conversations would constantly get stuck. Dingemanse attempts to discover where such words come from and what their influence is on the structure of language.

His research is primarily fundamental but is also relevant to all kinds of social developments. We are talking more and more to devices, such as the iPhone’s Siri and Google Nest. For this to run smoothly, we need to know more about the structure of conversations, and preferably about their universal structure, i.e. not just limited to a few European languages. Dingemanse’s research can contribute to this.

Another one of his studies focuses on iconicity: how words and gestures can portray meaning. His work in this field reveals why some words are easier to learn than others and what is involved in relating something “with all the smells and colours”. A related line of research focuses on synaesthesia, i.e. how the senses are intermingled with one another. In the course of het Groot Nationaal Onderzoek naar Taal en Zintuigen ​[the National Survey on Language and the Senses​], for example, he and his colleagues discovered that almost everyone – whether they are a synaesthete or not – connects vowels with colours in the same way (for example, “aah” is almost always red and “ee” is lighter than “oo”). Associations like these show how our brain processes sounds.

He followed up his PhD research by working at the Max Planck Institute for Psycholinguistics in Nijmegen, where he directed a series of interdisciplinary research projects. Since 2018 he has been an associate professor in the Department of Language and Communication at Radboud University, where he leads his own research group and conducts research at the Centre for Language Studies (CLS). He is also an affiliate research fellow at the Donders Institute for Brain, Cognition and Behaviour in Nijmegen.

Dingemanse has received various grants, including VENI and VIDI grants from the Dutch Research Council (NWO), and in 2017 was in the top 25 of “talented young scientists” listed by the Dutch edition of New Scientist. In 2015 he and two colleagues were awarded an Ig Nobel Prize “for discovering that the word ‘huh?’ (or its equivalent) seems to exist in every human language”. The Ig Nobel Prizes are awarded for “science that makes you laugh, then think”. The study had already received worldwide media attention.

The Heineken Young Scientists Awards are important incentive prizes for young researchers whose outstanding achievements mean that they set an example for other young scientists. Each prize comprises a monetary award of EUR 10,000 and an artwork. Mark Dingemanse is one of four researchers receiving this year’s Heineken Young Scientists Awards. The winners are selected from four research domains: Medical/Biomedical Sciences, Humanities, Natural Sciences and Social Sciences. The jury consists of Academy members and members or alumni of The Young Academy. This year, it was chaired by Carl Figdor, an Academy member and professor of immunology at Radboud University Nijmegen. Each prize comprises a monetary award of EUR 10,000 (funded by the Alfred Heineken Fondsen Foundation) and an artwork.