Julija Baranova will defend her thesis Tuesday 21th of January 2020 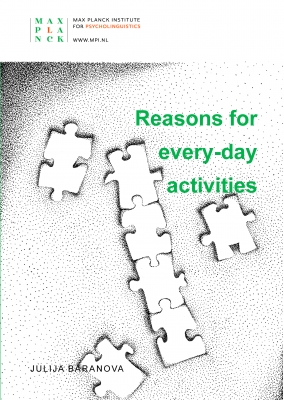 On Tuesday 21th of January 2020, at 10.30, Julija Baranova will defend her thesis entitled "Reasons for every-day activities" in the Academiezaal of Radboud University. As with all defenses, it is a public event and everybody is welcome to join.

Human cognition has flaws, as many psychological experiments demonstrate. We perform poorly on simple logical tasks and we are prone to cognitive biases. The argumentative theory of reasoning, however, claims that human reasoning ability has evolved to enable argumentation in social interaction as opposed to providing correct answers on socially irrelevant tasks. This theory has not been supported by actual conversational evidence up until now. In her thesis Julija Baranova makes clear that speakers are selective in the way they produce reasons (or arguments) in casual interaction. The default seems to be to withhold the reason and let the recipient infer it from the interactional context. Only when no appropriate context is available to the recipients will the speakers provide reasons for their actions. So, recipients are skilled in finding reasons to explain speakers’ behavior. This way of communication is efficient, but it biases humans towards confirmative thinking. It could further be hypothesised that human reasoning ability has evolved for efficient communication, which can potentially explain not only confirmation bias but also other human cognitive ‘flaws’.