Limor Raviv will defend her thesis Thursday 7th of May 2020 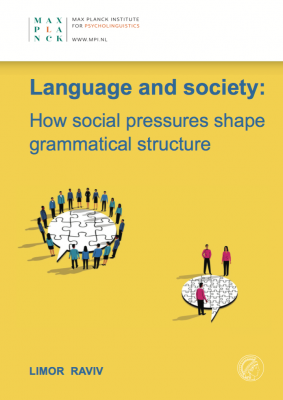 On Thursday 7th of May 2020, at 12.30, Limor Raviv will defend her thesis entitled 'Language and society: How social pressures shape grammatical structure'.
Due the situation, the defense will take place online, and will be live-streamed by the Radboud University. You are welcome to watch it remotely.

Why are there so many different languages in the world? How much do languages differ from each other in terms of their linguistic structure and their learnability? And how do such differences come about? One possibility is that differences between languages (i.e., linguistic diversity) stem from differences in the social environments in which languages evolve. In her doctoral thesis, Limor Raviv tried to shed light on the social origin of language diversity. She did this by experimentally examining the live formation and acquisition of new languages created in real-time under different social conditions. She developed a group communication experiment, where groups of participants needed to create a new artificial language to communicate with each other about various scenes with moving objects. She then tested how the process of language evolution was shaped by the fact that the languages developed in different communities, with different population sizes and different types of social network structure. The results showed that big groups developed more systematic and structured languages, and did so faster and more consistently than small groups. In contrast, there was no evidence that the network structure in the groups played a similar role: Densely connected and sparsely connected groups all reached similar levels of systematic structure. She also tested whether languages that evolved in big and small groups differed from each other in how easily they were learned and used by new people. The results showed that more systematic languages (which were more likely to develop in big groups) were learned better and faster compared to less structured languages with many irregularities. Moreover, participants who learned more systematic languages were better able to label scenes they had not seen before, and could better communicate about the scenes with strangers they had not met before. Together, the studies in this thesis show that community structure affects the development and nature of language structure in the lab.