Mathias Barthel will defend his thesis Thursday 23rd of January 2020 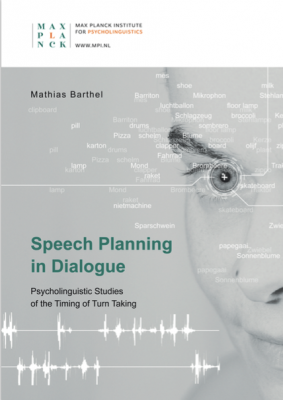 On Thursday 23rd of January 2020, at 14.30, Mathias Barthel will defend his thesis entitled "Speech Planning in Dialogue: Psycholinguistic Studies of the Timing of Turn Taking" in the Aula of Radboud University. As with all defences, it is a public event and everybody is welcome to join.

When we talk to one another, we swap the roles of speaker and listener many times a minute. Apparently without any great effort, we mostly begin talking just a fraction of a second after our conversational partner finished their turn of talk. However, as we know from speech production studies testing participants in monologue situations, planning a sentence should take us much longer than the average short gap that we leave between two turns of talk in a conversation. How can we be so fast in planning what we want to say in a conversation with someone else?

Mathias Barthel investigated when people in conversation plan what they want to say and how they know when exactly the floor is open for them to say it. For his PhD thesis, he tested participants in a conversational task as they were talking to one another, while he tracked the direction of their gaze and measured changes in the size of their pupils as they talked. Analysing these data together with the timing of participants' speech, he found that they were planning what they intended to say as early as they knew what they wanted to say, even when their conversational partner was not yet finished with their turn. That means that people start planning their responses while they are still listening to what they want to respond to. Moreover, changes in participants' pupil sizes revealed that people pursue this planning-in-overlap strategy even though it is cognitively more demanding for them than planning their own turn in silence after their conversational partner has finished speaking. Conversationalists usually decide for more effortful, ealy planning, Barthel argues, because they want to avoid the social consequences of being late with uttering their next turn. If one leaves a long gap before uttering a response, one might lose the rights to the next turn as someone else might start speaking first, or one might be misinterpreted as having low interest in the conversation or its topic.