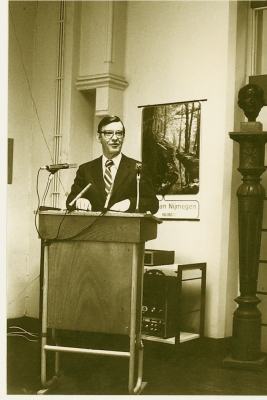 In 2020 the Max Planck Institute for Psycholinguistics (MPI) in Nijmegen celebrates its 40th anniversary. The anniversary of our Institute will be celebrated with a number of events, which will be announced in the course of this year.

The MPI started as a project group in 1977, and became an institute in 1980. In 1986 the MPI found its home in a new building at the campus of the Radboud University.Multiple further extensions of the institute followed, until it reached its current size.

For information on the current institute and a brief description of its history, see our history webpage.

Photo: Opening by MPG President Lüst, President of the MPG

The following events are already scheduled:

January 8: The opening workshop for the Jerome Bruner library that the institute acquired from the Bruner family.

July 3-5: A conference on the Neurobiology of Language: Key Issues and Ways Forward.