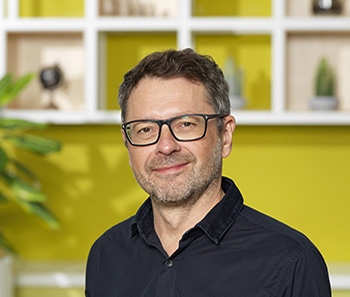 The MPI congratulates Falk Huettig, who has been appointed Professor of Psycholinguistics and Cultural Cognition at Radboud University Nijmegen.

Huettig investigates how human cultural inventions like written words, numbers, music, and belief systems shape the mind and brain from the beginning of our lives. Looking at the Literate Brain, the Predictive Brain, and the Multimodal Brain offers him a window into the culturally-shaped mind. Diverse groups, such as illiterates in India, young children, individuals with reading disorders and highly educated individuals take part in his studies. Huettig uses behavioural measures, functional and structural neuroimaging techniques, and computational modelling. In essence, he asks to what extent culture determines what it means to think as a human.

Since 2007, Huettig has been at the Max Planck Institute (MPI) for Psycholinguistics in Nijmegen. He has been a Senior Investigator at the MPI and a Principal Investigator (Affiliated) at the Donders Institute for Brain, Cognition and Behaviour. In addition to his scientific work, he has represented the MPI for Psycholinguistics on the scientific council of the Max Planck Society.

Since 2009, he has also supervised PhD students within the MPI. Huettig was visiting professor at the University of Hyderabad in India from the years 2013 to 2015, and was also guest professor at the Jawaharlal Nehru University (JNU) in New Delhi, India, in 2017.

Huettig received worldwide media attention in 2017 for his research showing that  learning to read at a later age not only resulted in major changes to the outer layer of the brain (the cortex), but also to the deeper (subcortical) structures.