News about The Language Archive 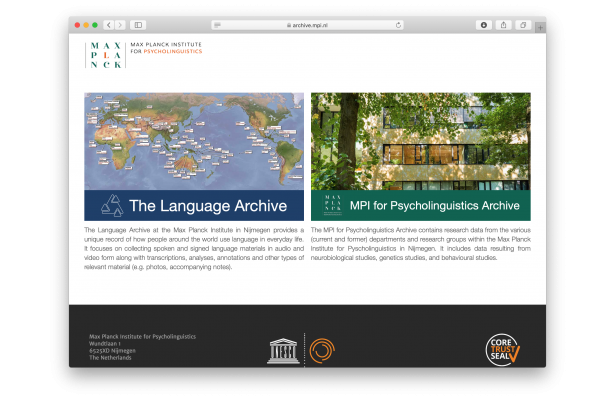 The Language Archive at the MPI received a significant update recently. The most striking difference is that it now features two separate portals, one focusing on the spoken and signed language collections, the other focusing on the various types of research data that are collected within the MPI’s departments and groups. Each portal features a graphically appealing landing page that highlights the most important sub-collections within them.

Some further improvements include:

The MPI started to systematically archive language corpora in the late nineties. In 2000, it became the central archive for the endangered languages documentation collections that were created as part of the Volkswagen Foundation’s DOBES funding programme. In 2015, a selected number of collections were added to the UNESCO Memory of the World register. Some further highlights of the archive include the Corpus NGT (Nederlandse Gebarentaal / Dutch Sign Language), which includes more than 72 hours of video recordings of dialogues in Dutch Sign Language, and the Dutch Bilingual Database, which is a large collection of data resulting from studies on bilingualism with speakers of Dutch, Sranan, Sarnami, Papiamentu, Arabic, Berber and Turkish. It contains over 540 hours of audio, 10 hours of video and approximately 615.000 transcribed words.

The archives can be reached at https://archive.mpi.nl. Any feedback about the usage of the archives is highly appreciated and can be easily submitted using the feedback button at the bottom right of the archive pages.