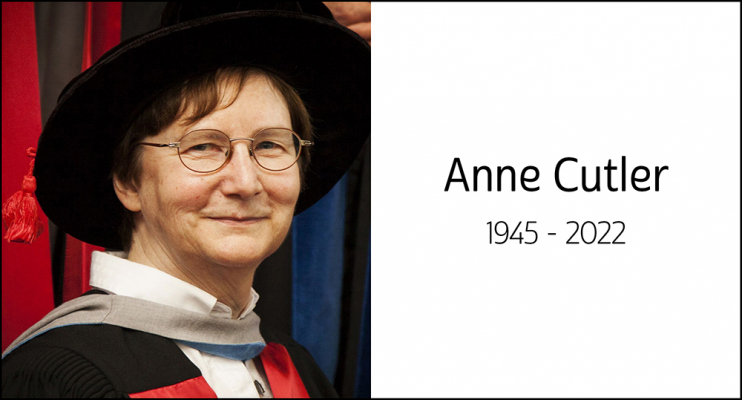 It is my sad duty to let you know that our director emeritus Anne Cutler passed away on 7 June, 2022. Please see below for an obituary by Pim Levelt. The institute will organise a memorial event for Anne in due time. We will miss her very much.

We have opened an online condolence book dedicated to sharing memories of Anne. Please feel free to share your thoughts or perhaps add a photograph.

To the condolence book ›

We are shocked and deeply saddened by our Emeritus Director Anne Cutler’s passing away on 7 June, 2022, at the beginning of her long-anticipated first post-Covid visit to the UK and the Netherlands. Our condolences go to Anne's husband Bill Sloman, who accompanied her on this, her last journey.

Anne Cutler became Scientific Member of the Max Planck Society and Institute Director in 1993. With her highly productive team, and together with colleagues Dennis Norris and James McQueen, she developed what many consider to be the most comprehensive theoretical model of spoken word recognition, called ‘Shortlist’. It accounts, among other things, for the ever-astonishing fact that we, as listeners, incrementally and ‘on-line’ recognize successive words in the continuous speech of others, even before these words have fully sounded, and even though these words are not separated by pauses. Anne constantly subjected the theoretical model to rigorous experimental testing. Many of her papers have become citation classics.

But there was a deeper, more biological objective in Anne’s research. Infants acquire whichever language they are exposed to. Hence all human brains must, in principle, be able to process all human languages. This does not mean, however, that all languages are processed in the very same way. Through sophisticated cross-linguistic experimentation, Anne demonstrated that adult listeners indeed use language-specific strategies, for instance in segmenting continuous speech into its component words. Together with Jacques Mehler, Anne discovered that these differences have their source in early infant listening experience and in the child’s construction of an initial vocabulary. Using advanced perceptual and neurophysiological measurement techniques, Anne and her co-workers demonstrated that these basic and language-specific phonological abilities already begin to develop during the second half year of life, before infants attach any meanings to the words they are acquiring.

The downside to this early shaping of our speech recognition abilities, Anne discovered, is that adults can rarely perform like natives in perceiving speech that is not in their native tongue. Even highly fluent second language users are measurably disadvantaged in their ability to parse continuous speech into its component words. That disadvantage is precisely predictable, as Anne showed experimentally, from the comparative phonology of mother tongue and second language. It is both systematic and unavoidable.

Anne’s 2012 monograph Native Listening (MIT Press) presents a masterful, highly readable review of this major basic research enterprise. Anne led her research group like a strict mother, always standing up for her people, but also setting high standards. She has been a beloved role model for her students and postdocs.

After Anne retired as a director of our institute in 2012, she became Research Professor, since 2018 Distinguished Professor, at MARCS Auditory Laboratories of the University of Western Sydney, Australia and eventually Research Chair at the MARCS Institute for Brain, Behaviour and Development, adding another productive decade to her already full research portfolio. She co-established and played a leading role in the ARC Centre of Excellence for the Dynamics of Language.