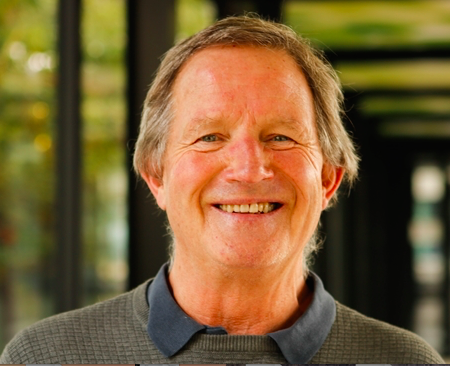 It is with a true sense of loss that we record the unexpected death of Pieter Muysken on April 6th 2021. He was an External Scientific Member for the Max Planck Institute for Psycholinguistics, appointed to supplement our linguistic expertise.

Born in Bolivia, educated at Yale, and with a PhD from Amsterdam, Pieter was an international scholar of wide renown. Pieter played an important role in the Nijmegen scene, attracting outstanding linguistic researchers, and conducting intramural and extramural negotiations with consummate skill.  Despite his many accolades (Spinoza prize, royal decorations, ERC awards and so on), he was disarmingly modest, and with his big grin and easy manner readily accessible to students and colleagues alike. He trained many young linguists (some at the MPI) who have gone on to become distinguished academics.
As Mark Dingemanse aptly commented: "Pieter was always full of ideas, but what struck me was how at base, he cared about building personal relations with people. Whenever he was at MPI he made a point of dropping by our offices in the Language and Cognition corridor, one by one, and it was always a pleasure to catch up and plot new projects with him. He served as a mentor for many of us and had this wonderful way of elevating others. Pieter was truly a Mensch."

With his multilingual talents, Pieter was a supremely competent fieldworker, roaming the Andes looking for neglected languages. Although retired from university duties, he had continued to play a role in the Language and Interaction consortium based in Nijmegen. His abiding interest was in language genesis through the mixing of languages in multilingual settings. This topic opens up exciting psycholinguistic issues (how does one brain handle multiple languages and their use), sociolinguistic issues (who speaks what language, or what mix of languages to whom and when) and promises to answer some of the questions about how we come to have so many languages on the planet. Pieter pursued each of these lines of enquiry, conducting extensive research on code switching (the use of multiple languages in a single utterance) in a number of multilingual settings (for example Dutch-Papiamento bilingualism in Surinam and the Netherlands). He also extensively studied the sociolinguistics of the many dialects of Quechua and their origins in language contact with Aymara, Spanish and other languages in South America. He applied these insights to trying to understand the patterns of language diversification in Latin America as a whole. He co-authored with Willem Adelaar a magisterial survey of the languages of the Andes. He went on to supervise the building of extensive databases representing many of the over 400 indigenous languages of South America, allowing the use of modern phylogenetic methods to explore their historical relations. A particular interest of his was in the scores of ‘isolates’ or languages of no known language family, which particularly cluster along the border of Bolivia, the country of his birth, and Brazil.

Pieter also played an important role in bridging the linguistic camps that divide the discipline. In his major theoretical work, Functional Categories, he showed how perspectives from many different angles – psycholinguistic, sociolinguistic, neurolinguistic – can be brought to bear on core concepts of grammar, as viewed from different theoretical perspectives.

Pieter will be sorely missed from the Netherlands linguistic scene where he has played an important moderating role, but his untimely loss will also be felt by many colleagues overseas, and especially in Latin America. The Institute has lost an outstanding intellectual character with unusual human warmth and tact.