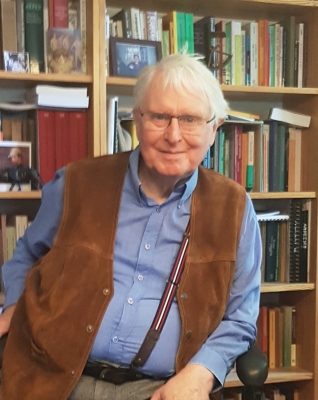 We were deeply saddened to learn of Pieter Seuren’s passing away on November 6, 2021.

Pieter Seuren has been a Research Fellow of our Max Planck Institute since his retirement in 1999. He had taken up the chair of Philosophy of Language at Radboud University in 1974, just two years before we began in Nijmegen. Right from the beginning Pieter became a helpful guide and our steady anchor point in matters of linguistics and its relevance for the study of mind and cognition. Pieter Seuren laid down his ecologically valid formal linguistics in innumerable papers and in an impressive, wide-ranging series of 15 books, among them his 1969 Operators and Nucleus, his 1985 Discourse Semantics, his 1996 Semantic Syntax, his 1998 historical monograph Western Linguistics, his foundational 2009 two-volume Language from within, his 2013 From Whorf to Montague and his 2018 Saussure and Sechehaye. Only days before his death Pieter submitted to a publisher the manuscript of his final magnum opus, Thinking, Reality and Language: A refutation of positivism as the underlying philosophy for the study of mind.

Pieter was not only a dear friend and wonderful colleague to many of us, but also a great source of inspiration to the numerous young scholars he kept guiding and supervising till quite recently. Pieter played an active role in the intellectual life of the institute, with lively engagement in discussions after colloquia at the institute, but also in an informal way during many interactions at lunch in the institute’s cafeteria. Pieter’s knowledge and deep insights in the structure of a large number of languages was phenomenal. He enjoyed sharing this knowledge with others. Pieter did not shy away from taking a strong theoretical stance, even if this was not always sufficiently appreciated by the mainstream traditions in linguistics. However, Pieter’s intellectual contributions went far beyond the language sciences. At the institute he gave a lecture series on the Roman emperors, and discussed and wrote a book on episodes in world history (Excursies in de tijd: Episodes uit de geschiedenis van onze beschaving). Pieter was a true scholar and an intellectual giant, but also contributed to the lively discussions with anecdotes and wit. His teaching on language philosophy, which one of us (PH) had the good fortune to follow as a student, was crystal clear and very engaging. On multiple occasions Pieter expressed his gratitude that he could spend many incredibly productive years after his retirement at the institute. Our gratitude to him is equally great for the many contributions to the science and the intellectual life at the Max Planck Institute for Psycholinguistics.

Pieter Seuren was an Honorary Member of the Linguistic Society of America and a member of the Royal Netherlands Academy of Arts and Sciences. He was made an honorary Doctor of Glasgow University in 1996.