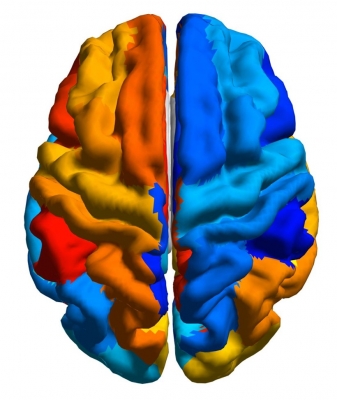 The left and right sides of our brain specialise in different functions. But what is the genetic basis of this left-right asymmetry? In a large-scale genetic study, scientists from the Max Planck and Donders institutes in Nijmegen and the University of Bordeaux found fifty-seven genes connected to human brain asymmetry. These genes are especially active during prenatal brain development. There was also an overlap with genetic variants associated with psychiatric disorders and educational attainment.

Asymmetry plays an important role in the way that the human brain is organised. For instance, for the majority of people, the left hemisphere is dominant for language and controls the right hand. But scientists know very little about the genes that create differences between the left and right hemispheres. “Asymmetry of the brain can also be altered in disorders such as autism, so we suspected that genetic effects on brain asymmetry might also influence susceptibility to psychiatric disorders.” says study leader Clyde Francks.

To investigate the genetic basis of human brain asymmetry and its possible link to psychiatric disorders, Francks and his team undertook a large-scale genetic study. The researchers studied genes and brain scans of more than 30,000 adults from a large database (the UK Biobank). The team tested whether asymmetry was associated with any of the millions of genetic variants located all across the genome. What sort of genes would be implicated in brain asymmetry?

The researchers found fifty-seven genes that contributed to variation in brain asymmetry. These genes turned out to be especially active in the brains of developing embryos. More specifically, the genes play a role in creating the little tubes (called ‘microtubules’) of the protein skeleton that shapes each of our cells. “It may be that microtubules contribute to the creation of the left-right axis in the brains of early embryos, because microtubules are ‘handed’”, explains Francks. “Mechanisms in which the microtubules ‘twist’ within cells to create a left-right axis have been seen in fly, snail and frog embryos”.

Some of the genetic variants linked to brain asymmetry were also associated with schizophrenia, autism, educational attainment or left-handedness, traits previously connected to brain asymmetry. According to Francks, “This makes sense if we consider that many aspects of healthy brain structure and function show hemispheric asymmetries. Any disruptions while setting up the normal embryonic asymmetry could have consequences for adult brain health and functioning.”

The team will work with mice in which some of the microtubule genes have been disrupted, to understand how these genes change brain asymmetry in embryos. This might also reveal aspects of brain development that are disrupted in psychiatric conditions. “The genetic overlap between brain asymmetry and psychiatric illness provides a possible clue towards identifying one aspect of susceptibility to these diseases”, concludes Francks.