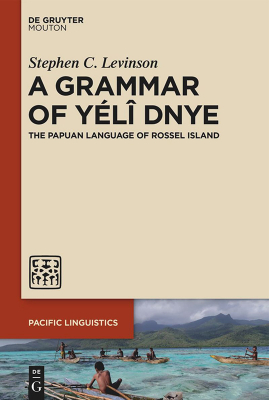 Stephen Levinson, director emeritus of the Max Planck Institute for Psycholinguistics in Nijmegen, has just published after a quarter of a century’s work a grammar of Yélî Dnye, a language spoken on a remote island in the Pacific by 6000 people. The book is published open access. “A language like this broadens our horizons about what constitutes a possible language.”

“Why be interested in a minor language spoken by less people than fill a football stadium, or even a train to Amsterdam?”, asks Levinson, and replies: “Here’s why: this language is not related to any other language in the world; it has 90 distinctive sounds—the largest number in the Pacific—and some of them are not known from any other language.”

“The language has a number of other very unusual and unique features, such as a remarkable number of possible verb forms. So for example to say “If X had gone, she would have seen it”, the speaker must select from 270 alternatives, according to whether, for instance, X is singular, plural, dual, the action occurred the day before yesterday, yesterday or today, and so on.”

“This language is a historical outlier, left over from some earlier settlement of the Pacific, and it is also a structural outlier. It illustrates just how extraordinary the potential variability of language is. The variation in structure of the world’s 7000 languages poses a special challenge to the mission of the MPI for Psycholinguistics, which tries to capture just what makes human cognition language-ready in a way that no other animals’ minds are.”

“When I took this language on,” adds Levinson, “I had no idea of the incredible complexities I was getting into. So I now look on the book with pride and despair—pride that I managed to see it through, but despair that I must have missed some key organising principles of the language.”

“You cannot imagine the adventures that lie behind this book—shipwreck, pirates and gun fights all narrowly avoided by luck, cyclones, being an aid worker, falling overboard at night, boats running onto reefs, and running for my life. Some of these adventures were shared with my wife Penelope Brown and—more recently—my collaborator Marisa Casillas.”

“I had logistical help from so many people, missionaries of all persuasions, captains, diplomats, small-plane pilots, archivists, and many, many Papua New Guineans. Gunter Senft, also previously of the MPI, introduced me to research in Papua New Guinea. On the island, 400km offshore from the mainland, the local people were unfailingly kind and supportive, and it is devastating that Yidika, the man who helped me most (and who once came to the MPI) died just short of the book’s completion.

Here at the MPI, the technical group were a fantastic help, from finding equipment that could survive the rigours, solving archiving problems, to helping me get illustrations printable; colleagues laboured through earlier drafts and Edith Sjoerdsma, Ludy Cilissen, and latterly Angela Terrill helped the editing.”

An open-access recording (including a transcription and translation) of the language has been made available through The Language Archive (TLA), a database of languages spoken around the world.

“What I would say to young psycholinguists is: Take on a language unrelated to your own—it will blow all your preconceptions about language out the window. Current psycholinguistics is the psycholinguistics of familiar European languages, and it doesn’t fully generalise in the way science should. Besides, tackling an under-described language is like a hyper-dimensional crossword puzzle, a real intellectual challenge, and you can get a real kick out of solving just a few of the clues.”