Whale clans use vocalisations to mark their culture 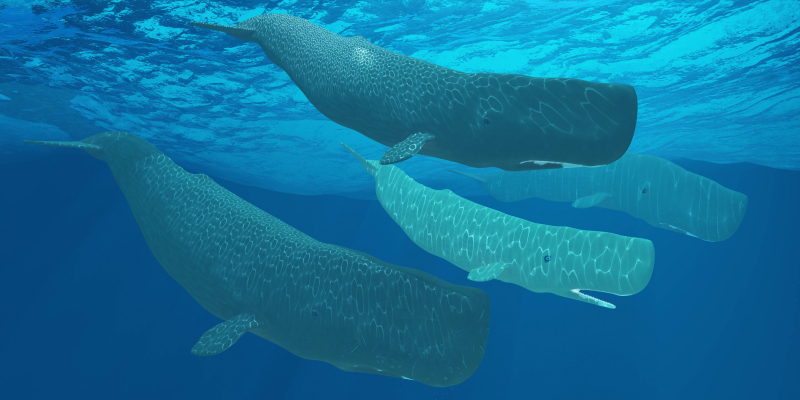 How similar are non-human animal cultures to our own? An international team led by researchers from the Max Planck Institute for Psycholinguistics in Nijmegen, the Netherlands and Dalhousie University in Halifax, Canada, studied sperm whales on an unprecedented geographical scale. Across the Pacific Ocean, sperm whale clans use certain patterns of clicks or ‘codas’ to mark cultural groups, especially when clans overlap. Like human ethnic groups, non-human animals may use symbolic markers of cultural identity.

For decades, researchers and the public have been captivated by the deep-diving sperm whales; highly social animals who live in groups of mothers and calves. The whales communicate with Morse code-like series of clicks called ‘codas’, and whales that use similar coda ‘dialects’ belong to the same cultural group or ‘vocal clan’. Sperm whale researchers have long suspected that whales use certain coda types to distinguish vocal clans. But previous studies of sperm whale clans were largely region-specific.

“This work was the culmination of decades of research efforts by individuals working throughout the Pacific Ocean”, says first author Taylor Hersh. “We decided to share data and work collaboratively, to learn something new about this enigmatic, charismatic, and cultural animal.”

The team set out to investigate whether certain sperm whale codas are similar to human ethnic markers—such as dialects or clothing styles. They were specifically interested in ‘identity codas’; coda types that are particular to a clan, rather than common across clans.

Could such codas be symbolic markers of sperm whale clan identity? If so, they might mirror human patterns, where cultural groups are most marked or distinguishable in regions where multiple groups overlap—perhaps to better signal their group identity. In the same way, sperm whales may rely on identity codas more in areas with multiple overlapping clans.

“Whales from different clans never interact with each other, even when they share the same waters”, explains Hersh. “This suggests that the whales have some way of distinguishing “us” vs. “them”, and we wanted to know if they do so using identity codas”.

An international team of 27 researchers studying Pacific Ocean sperm whales pooled their acoustic datasets. This way, the team could investigate click patterns across 23 locations, from Canada to New Zealand and Japan to South America. For some locations, they still needed to extract codas from the whale recordings. This was done as part of the “Global Coda Dialect Project” led by Shane Gero (overall project and Atlantic Ocean lead), Hersh (Pacific Ocean lead), and Chris Johnson (Indian Ocean lead).

The Pacific Ocean team extracted over 23,000 codas. Next, they determined how many of those were used as identity codas by whale clans, with a method previously developed by Hersh and colleagues.

The team identified seven sperm whale vocal clans across the Pacific Ocean, each with their own dialect and identity codas. The whale dialects followed the pattern predicted from human culture. As spatial overlap between clans increased, their dialects in terms of identity coda usage became more distinct.

Knowing about the culture of non-human animals is important for conservation efforts. According to Hersh, the findings also point towards similarities between human and non-human cultures. “Our results demonstrate how culture can structure animal populations. The conditions required for the evolution of symbolic markers of cultural identity exist among non-human animals as well”.

“Past research on vocal clans has shown that they not only differ in the codas they use, but also in how they move, forage, and socialise. This matches another human ethnic marker prediction: that symbolic marker and social norm distributions should correspond. However, we know very little about the social norms and ‘lifestyles’ of several of the Pacific Ocean sperm whale clans documented here, and hope to study their behaviour more in the future. While the present work focused on the Pacific Ocean, we plan to extend our analyses to sperm whales in the Atlantic and Indian Oceans too.”