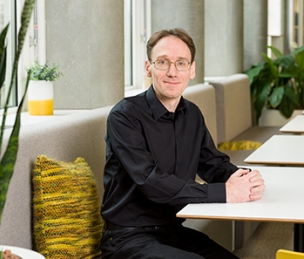 Simon E. Fisher is director of the Max Planck Institute for Psycholinguistics and Professor of Language and Genetics at the Donders Institute for Brain, Cognition and Behaviour in Nijmegen, the Netherlands. Simon obtained his Natural Sciences degree at Trinity Hall, Cambridge University, UK followed by a DPhil at the Genetics Unit of the Biochemistry Department, Oxford University. For his postdoctoral research he joined Prof. Anthony Monaco's group at the Wellcome Trust Centre for Human Genetics (WTCHG) in Oxford, and worked on identifying genetic factors that contribute to developmental disorders such as dyslexia and speech and language impairments. During this time he and his colleagues discovered FOXP2, the first case of a gene mutated in speech and language impairment. In 2002, Simon was awarded with a Royal Society Research Fellowship and became head of his own laboratory at the WTCHG, where he used state-of-the-art methods to uncover how language-related genes influence the brain. From 2007-10 Simon was also the Isobel Laing Fellow in Biomedical Sciences at Oriel College, Oxford, where he taught Biochemistry and Medical Genetics. In 2010 he was appointed director of a new department specifically devoted to "Language and Genetics" at the Max Planck Institute in Nijmegen.

Simon is author of over 220 journal articles, including high impact publications in Nature, Nature Genetics, Science, New England Journal of Medicine, Cell, Current Biology, American Journal of Human Genetics, Nature Reviews Genetics, Nature Reviews Neuroscience, Annual Review of Neuroscience, Trends in Genetics and Trends in Cognitive Sciences. According to Google Scholar, his work has received over 29,300 citations, and he has an h-index of 81. Simon is frequently invited to talk at leading international conferences across a diverse range of fields, and has also spoken to school, student and public audiences. His research has a strong interdisciplinary remit, integrating data from genetics and genomics, psychology, neuroscience, developmental biology and evolutionary anthropology. Simon is an elected fellow of the Society of Biology, and his awards include the Francis Crick Prize Lecture in 2008 [webcast here], and the inaugural Eric Kandel Young Neuroscientists Prize in 2009.

You can also follow Simon's work on ResearchGate, ResearcherID and Google Scholar.

Co-affiliated member of the Radboud Institute for Molecular Life Sciences, Nijmegen, the Netherlands.

February 2018: Discussant, Nijmegen Lectures by Elena Lieven, Understanding how children learn language: What progress has been made since 1965? Nijmegen.

December 2017: Speaker, Are we musical animals? Developing a Roadmap for Using Intrinsically Motivating Games for Identifying the Musicality Phenotype. Workshop at the international conference ‘SMART Animals’. University of Amsterdam.

March 2015: SMART Cognitive Science: the Amsterdam Conference - Workshop Evolution of Language: the co-evolution of biology and culture. Amsterdam, the Netherlands.

April 2014: What Makes Us Musical Animals? Cognition, Biology and the Origins of Musicality, Lorentz Center Leiden, The Netherlands.

February 2013: American Association for the Advancement of Science, annual meeting; symposium on The biology and evolution of human language. Boston, Massachusetts, USA.

October 2011: Symposium on advances in the genetic research of neurodevelopmental disorders. Donders Institute for Brain, Cognition and Behaviour, Nijmegen, the Netherlands.

May 2010: *Public Lecture* University of Mainz, Mainz, Germany. (Part of Distinguished Lecture Series on Language and the Brain, co-ordinated by Prof. Angela Friederici).

May 2007: Brain development in children: a matter of connectivity? CHU Sainte-Justine  & University of Montreal, Quebec, Canada.

May 2007: Integrating Imaging and Genetics in Cognitive Research. The Grand Hotel & KNAW Trippenhuis, Amsterdam, the Netherlands.