Joe Rodd will defend his thesis Thursday 24th of September 2020 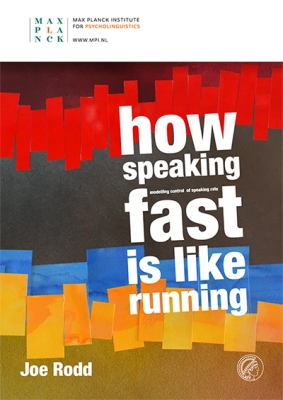 On Thursday 24th of September 2020, at 10.30, Joe Rodd will defend his thesis entitled "How speaking fast is like running: modelling control of speaking rate". As with all defenses, it is a public event and everybody is welcome to join. Due to the restrictions surrounding the COVID-19 outbreak, the event will take place and be accessible via live-stream.

Timing of speech is essential for communication. We all vary our speaking style from situation to situation. For instance, we may slow down to give listeners extra time to understand an important part of the message. Or we may speed up to say more in the same period of time. But how do speakers do this?

In his doctoral thesis, Joe Rodd tried to shed light on how speakers adjust the cognitive system that plans speech to result in different speaking rates. He compared two hypotheses. The first (the ‘accelerator hypothesis’) was that speaking fast is essentially the same as speaking slowly, but sped up in a linear fashion. This would mean that control resembles pressing harder on the accelerator pedal. Alternatively, speakers might use qualitatively distinct configurations for different rates (the ‘gaits hypothesis’). This would resemble the qualitative difference between walking and running gaits that animals with legs adopt to move around: speakers might go into a ‘walk-speaking’ configuration for slow speech, but ‘run-speaking’ configuration for fast speech.

To distinguish the accelerator and gait hypotheses, he had speakers name sets of pictures at different pre-defined speaking rates, and then used computational modelling to simulate the speech planning process that would have been required to produce these data. By looking at how the models varied according to the speaking rate being fitted, it was possible to say how the cognitive configuration changed between speaking rates. The differences that he observed were consistent with the gaits hypothesis, but not compatible with the accelerator hypothesis.

In a further experimental study this was confirmed. Speakers had to switch, during a trial, between different pairs of speaking rates. He found that some pairs were easier to switch between than others, which demonstrates that switching within some pairs involved changing ‘gait’, whereas switching within other pairs did not.

Together, the studies in this thesis show that speakers, rather than ‘accelerating’ their speech in a linear manner, adopt qualitatively different configurations of the cognitive system that plans speech to result in different speaking rates, much like switching between ‘walking’ and ‘running’ gaits.